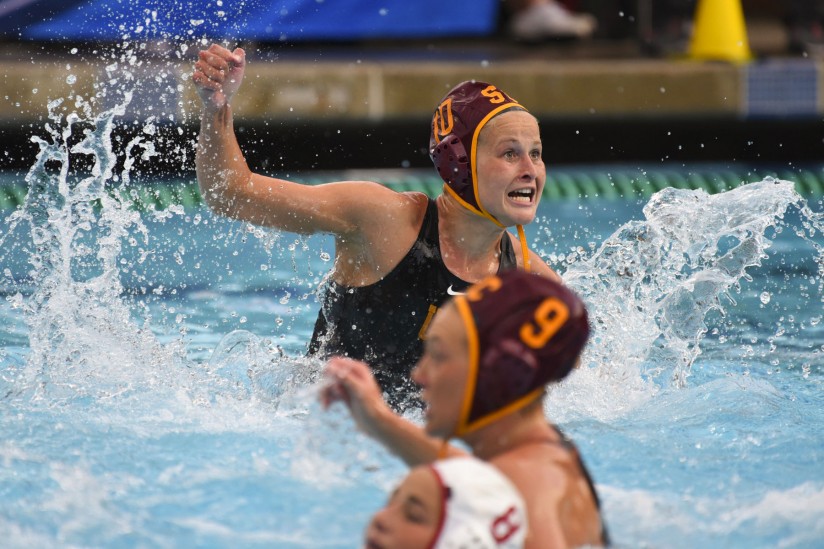 USC, which had eight of its women’s teams finish in the Top 10 in NCAA championship play during the just-concluded 2015-16 season, won its first Women’s Capital One Cup, a prestigious annual all-sports competition that determines the best women’s and men’s Division I collegiate athletics programs.

USC also was fourth in the 2015-16 Learfield Directors’ Cup Division I final standings, which annually decides the nation’s most broad-based athletic program by combining men’s and women’s finishes in 10 sports each. The university was just half a point out of third place. That was the Trojans’ fourth Top 10 finish in the past five years, and it follows their best-ever third place finish in 2014-15.  Stanford captured its 22nd consecutive Directors’ Cup in 2015-16.

Points toward the Women’s Capital One Cup are based on final standings in each of the 18 NCAA women’s championships.

Wins on the sand and in the water

We are honored to receive this award and applaud our women’s athletes and coaching staff on this remarkable achievement.

“We have always been proud of our women’s athletics program and are excited to see it recognized as the winner of the 2015-16 Capital One Cup,” said USC Athletic Director Lynn Swann. “As a first for our university, we are honored to receive this award and applaud our women’s athletes and coaching staff on this remarkable achievement. All of us at USC would like to extend our gratitude to Capital One for its continued support of student-athletes.”

The Capital One Cup is in its sixth year.

The team never trailed from start to finish in the 2022 MPSF Tournament. Next up: the NCAA tournament Dec. 3-4 in Berkeley.

The Women of Troy took down UCLA for the fourth straight time to secure the conference crown.