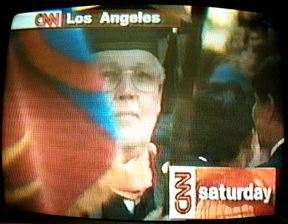 Ron Osborne carries the School of Engineering’s flag at commencement. Once a laid-off engineer, Osborne now has a new master’s degree and a position with Panasonic in Torrance. The graduation of the class of multimedia fellows was covered by CNN and reported in a front-page May 12 Wall Street Journal Work Week column.

It was a Kodak moment captured on CNN and flashed around the world.

Ron Osborne, 59-year-old grandfather who had been laid off from three jobs in the past decade, proudly bearing the school flag and leading the procession of engineering graduates through the throng in Archimedes Plaza on commencement day.

Ron Osborne, recipient of a master’s degree in computer science with a specialty in multimedia and creative technologies, finally free of aerospace uncertainties and employed in the entertainment industry by Panasonic in Torrance, authoring digital videodiscs at a new Panasonic plant in Torrance.

“This totally keeps me away from aerospace,” said Osborne. “A DVD holds 16 gigabytes, two full-length movies with directors’ notes. This technology is tying the entertainment industry to computers.”

WHAT HAS HAPPENED to the Southern California engineering and computer professionals who lost their jobs in the 1990s contraction of the aerospace industry, a contraction that continues today?

“We’ve been turning them into taxpayers,” said Chrys-ostomos “Max” Nikias, associate dean of USC’s School of Engineering and director of the school’s Integrated Media Systems Center (IMSC). “With help from private industry, we created a graduate-level program to retrain engineers and computer scientists for jobs in the rapidly growing multimedia and creative technologies industry.”

In a special small ceremony on commencement day, USC honored the 27 multimedia fellows, the second class to successfully complete the program. Each received a certificate attesting to his or her specialization in multimedia and creative technologies. All 27 earned a USC master’s degree in electrical engineering or computer science.

“I love being around successful people,” said Jasper Williams, senior management analyst with the city of Los Angeles and the Private Industry Council, who spoke to the new graduates. The IMSC retraining program, the brainchild of Nikias, is co-sponsored by USC, the Los Angeles Private Industry Council and the Labor Employment Training Corp. It receives funds through Title III of the federal Job Training Partnership Act.

All but three of this year’s 27 graduates have found jobs in their new profession, says IMSC career placement coordinator Nancy G. Sweeny.

William Lo was engineering manager for the now-defunct Micropolis Corp. when he was laid off in 1994. Now he’s a project manager consultant helping to develop a hand-held computer to collect and transmit health-care data, and he’s making more money than he did before.

“My career in disk-drive manufacturing was diminishing, but now I’ve moved to a higher level,” Lo said. “IMSC gave me the chance to progress with Los Angeles, where multimedia and creative technologies are a rapidly growing force in entertainment, software, health care and mobile communications.”

To engineer Joe Underwood, the 1990s have been a wild roller-coaster ride. In 1990 he lost his job working on a space-based interceptor. It happened again in 1993, when he was working on a missile program, and again in 1996, when the university where he taught was about to file for bankruptcy. Now at age 65, with plans to work at least another decade, he’s doing consulting work and negotiating with two institutions for a teaching post.

Underwood sees multimedia as the technology of the future. “If you don’t want to run with it, you had better get out of the way,” he said. “This technology isn’t just expanding, it’s exploding.”

TO QUALIFY for the program, the students must be Southern California-area engineers and computer scientists who were laid off in the past four years. They receive fellowships that cover tuition, fees, books, campus parking, gasoline and even child care. And all of the graduates receive job-placement assistance from Sweeny.

IMSC, which is a National Science Foundation engineering research center, is currently seeking funding to retrain additional engineers and computer sciences for the burgeoning multimedia industry.

“While the aerospace industry continues to shed jobs in Southern California, multimedia and creative technologies are growing rapidly as consumer electronics, entertainment, publishing, computers and telecommunications all converge,” said Nikias. “This will be a $40 billion market by 2000 and $65 billion by 2010. The multimedia industry will need a lot of highly trained talent.”