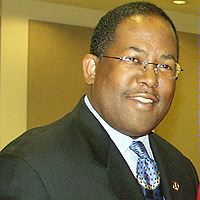 Assembly Constitutional Amendment 20, introduced by Ridley-Thomas (D-Los Angeles) in the state Legislature in September, would require signatures from 12 percent of registered voters, rather than 12 percent of those who voted in the last election, to put a recall on the ballot.

The amendment also would automatically replace a recalled governor with the lieutenant governor, require the chief justice of the California Supreme Court to set the date of a recall election and prohibit other measures from appearing on a recall ballot.

Ridley-Thomas said he hosted the public forum, which included California Attorney General Bill Lockyer, to examine the implications of the recent recall election and investigate ways to improve the system.

“This is a rare opportunity to influence public policy in its infancy,” he told law students who attended the forum.

Ridley-Thomas said he hopes new legislation will improve future recall elections and help prevent violations of the Voter Rights Act, which he said occurred in the Oct. 7 recall of Gov. Gray Davis.

Karen Getman, an attorney with Remcho, Johansen and Purcell, the San Francisco Bay Area law firm that represented Gov. Davis in recall litigation, said despite appearances that the election ran smoothly, 176,000 voters in Los Angeles County alone did not have their votes counted because of outdated voting machines.

USC law professor Erwin Chemerinsky, who organized the forum, expressed fear that the recall has unleashed a state of “perma-recall” in which people will continually recall officials they don’t like.

“You’ll always have 12 percent of voters who are unhappy with the results of the last election,” he said, adding that the 1911 law didn’t anticipate today’s political climate.

Getman said more signatures should be required to put a recall on the ballot.

“California is unique, in a bad way, in the percentage of voters required” to launch a recall election, she said. “We should get in line with other states and increase the threshold.”

Richard Hasen, a Loyola Law School professor, agreed the threshold should be higher, but he cautioned against making a recall too hard to launch.

“As much as people thought this was a circus-like event, the recall itself was quite popular,” he said. “A balance has to be struck to make this an unusual event. What I think we want is to make it difficult but still make it possible.”

A separate election for a replacement, he said, “takes more time, is more disruptive – and is probably a more fair way of doing it.”

Panelists also suggested changes for the way recall elections are funded, stricter criteria for candidates who seek to replace a recalled official and a runoff election to ensure that the winning candidate receives a majority, rather than a plurality, of the vote.