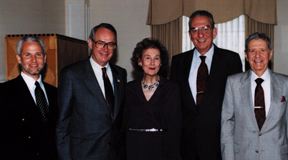 USC ALUMNA Katherine B. Loker has given $17 million to the university — $15 million to support hydrocarbon research and $2 million for a new track and field stadium.

The gifts, announced June 3, by President Steven B. Sample, set records at USC:

They are the largest ever received by the College of Letters, Arts and Sciences and the athletic department. Altogether, Katherine Loker and her late husband, Donald, have given more than $27 million to the university, placing the Lokers among the top five individual benefactors in USC history.

The gifts kick off the final phase of the Building on Excellence campaign, which will end Dec. 31, 2000. Sample also announced June 3 that the board of trustees has voted to raise the campaign’s goal by $500 million to $1.5 billion (see related story, page 1). “Katherine Loker has always been a special friend of USC,” Sample said. “It is fitting that she be the one to start us on the road to meeting this new challenge. The fact that she is an alumna is especially important, because she embodies the kinds of values we all associate with USC. Her name will remind generations of USC students and scholars what a dedicated alumna can do for her alma mater.”

Sample said that Katherine Loker’s latest gift will “permanently secure the vitality of the Loker Hydrocarbon Research Institute, just as her earlier foresight made the institute possible. Her generosity will also literally change the face of the university, by helping to build a new stadium for USC’s historically great Trojan track and field program.”

The $15 million gift to the Donald P. and Katherine B. Loker Hydrocarbon Research Institute in the College of Letters, Arts and Sciences will help support its research program. Under its scientific director, 1994 Nobel laureate George A. Olah, the institute has become the world’s leading research center in its field.

Morton Owen Schapiro, dean of the college, said: “When I became dean, I quickly realized what Katherine Loker has known for a very long time – that the ground-breaking research being undertaken by Dr. Olah and the Loker Hydrocarbon Research Institute is some of the most exciting science conducted anywhere in the world. Her extraordinarily generous gift will ensure that this work will continue as far into the future as anyone can imagine.”

Katherine Loker and her late husband were the principal contributors establishing the institute in 1977, and they personally endowed a chair for Olah, who was recruited to USC the year the institute was founded. Through a later gift, Katherine Loker funded development and construction of the institute’s Katherine Bogdanovich Loker Wing. When Olah heard that he had won a Nobel Prize in 1994, Katherine Loker was the first person he called with the news, and she participated in the Nobel ceremony in Stockholm. “I think Katherine Loker is the most wonderful, generous, foresighted lady,” Olah told the press at the time. “She has supported our institute since its inception. She believes in what we are doing.”

For her exceptional contributions through the research of the Loker Institute and other activities, Katherine Loker received an honorary doctorate from USC in 1997. At that time, Olah said: “She has been a key member – and, in the last decade, has chaired – the institute’s advisory board. She takes a very active role in the institute’s work and operations. The Loker Institute’s success as a nationally and internationally recognized institution could not have been achieved without the guidance and support of Katherine Loker and the board she chairs. Perhaps most important, she is a friend who cares about the students, staff and faculty of the institute.”

About the latest donation, Olah said, “I have run out of superlatives to describe Katherine’s generosity. She is a patron of science in the grandest tradition.” “There is no better example of our campaign theme, ‘Building on Excellence,’ than Katherine Loker’s long-term support of George Olah and the Loker Hydrocarbon Institute,” Sample said. “It represents a model of consistent philanthropic vision and personal involvement, over the decades, in support of scientific research directly benefiting the community.”

The institute’s achievements have been published in nearly a thousand scientific papers, a series of books and dozens of patents. Practical results of its research include a method to make improved high-octane unleaded gasoline in an environmentally safe way, thus helping to clean the air in the Los Angeles basin. Other patents resulting from institute research have applications in energy, industrial chemistry and pharmaceuticals. A new liquid-fuel-powered fuel cell developed by the institute in cooperation with the Jet Propulsion Laboratory is now under practical development.

The institute, housed in a 40,000-square-foot research facility, has grown to eight faculty members, 20 postdoctoral fellows, 40 graduate students and six staff members. It continues to attract millions of dollars in research support every year from the National Science Foundation, the U.S. Department of Energy and other agencies, as well as private industry.

“The atmosphere of learning and discovery at the institute is in the true tradition of a great university,” Katherine Loker wrote in a special 20-year anniversary commemoration of the institute. “I am particularly gratified that the discoveries made here have had a profound impact throughout the world. It is indeed a privilege to be a part of it.”

The Katherine B. Loker Track and Field Stadium

“We are as thrilled with the fact that the stadium will bear her name as we are with the funds that make it possible to begin construction on a new track and field stadium,” said Athletic Director Mike Garrett. “USC can claim a number of great women athletes as alumni, including many Olympians, and now we will have a world-class venue for track and field that bears the name of a woman. I think that will be inspiring to all our students, but especially our women students.”

Garrett called Katherine Loker a loyal supporter of track and field at USC. “She is a great fan and wonderful for the morale of our young athletes. She attends track and field events on a regular basis. Her enthusiasm is contagious.”

Plans are to create a 3,000-seat stadium on Cromwell Field that will house both men’s and women’s track and field offices and locker room facilities, with storage facilities under the stadium that will serve a variety of sports. Concession stands and restrooms will be built at both ends of the stadium, and the area will be re-landscaped for a public walkway with an archway at the entrance to the stadium. The new stadium will be called the Katherine B. Loker Track and Field Stadium.

USC’s heritage in track and field includes 26 NCAA men’s titles in outdoor track, plus two indoor NCAA titles and 31 Pac-10 crowns. The women’s cross-country program at USC has developed into one of the nation’s finest. Trojans have placed in the Top 10 of the NCAA Championships five times. The 1996 squad won the Pac-10 title and placed seventh in the NCAA finals.

Katherine Loker has been intimately associated with USC and, in particular, the College of Letters, Arts and Sciences for more than 50 years. As an undergraduate, she was active in intercollegiate athletics and graduated as an English major in 1940. She married Donald P. Loker, a well-known stage and screen actor who later became a vice president of the Starkist Foods Co., founded by Katherine Loker’s father in 1917.

Katherine Loker has received an Alumni Merit Award from USC’s General Alumni Association; an Asa V. Call Award, the alumni association’s highest honor; and a Raubenheimer Award from the College of Letters, Arts and Sciences. She is a Presidential Associate, a member of the board of councilors at the College of Letters, Arts and Sciences, a life member of Town and Gown and a member of the San Diego Trojan League.

She is an active supporter of the Donald P. Loker Cancer Treatment Center at the California Hospital Medical Center, Los Angeles. She serves on the Committee on University Resources at Harvard University, and she received the Harvard Medal in 1995.