The USC Schaeffer Center for Health Policy and Economics and the Brookings Institution brought together more than 140 policy makers, Capitol Hill staff and media June 15 in Washington, D.C., for the launch event of the Schaeffer Initiative for Innovation in Health Policy.

“There is a striking lack of attention to what dominates American health care,” Wyden said. “And that is chronic care.”

Wyden said Medicare must urgently be updated to meet its guarantee to enrollees. Medicare rules hobble the nation’s seniors as they try to navigate a complex system when they are confronted with chronic diseases, he said.

He noted that 93 percent of all Medicare spending is for chronic care and that those disbursements will grow exponentially in coming years with 10,000 people a day becoming eligible for the program. Wyden said Medicare must be accessible and affordable — including access to new medicines that amount to cures — and the care must be coordinated.

Alice Rivlin, who moderated the event’s panel discussion, agreed. The 85-year-old senior fellow at Brookings said she is her own care manager and someone should be helping her out. “Managing chronic care is difficult, even for someone with a PhD in economics,” she said.

“Leaving seniors on their own when it comes to coordinated care defies common sense,” Wyden said.

Leonard D. Schaeffer, a trustee at both Brookings and USC, introduced Wyden, who has served in the Senate since 1996. Schaeffer set the stage with the sobering statistic that over half of all Americans suffer from a chronic disease. 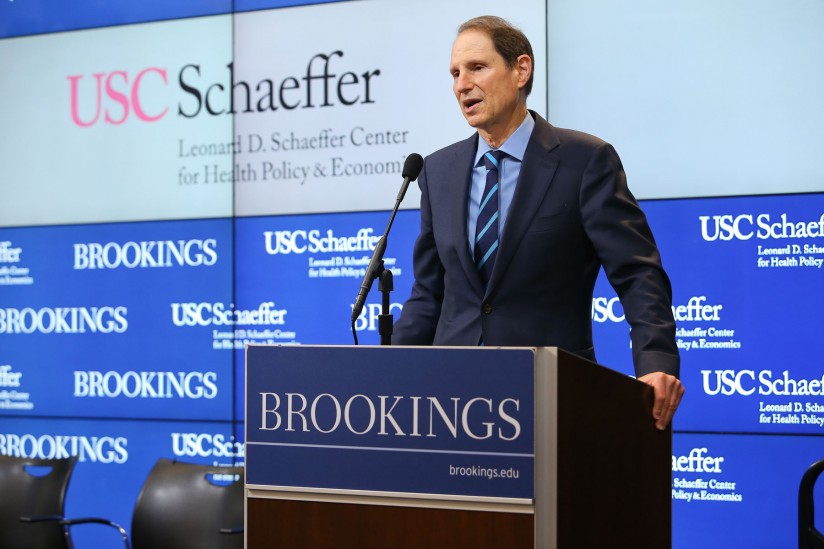 Wyden, ranking member of the Senate Finance Committee, cited several examples of Medicare enrollees suffering from coverage that lacks flexibility to meet their needs, including a patient afflicted by a stroke and another facing Alzheimer’s disease.

In the case of the stroke victim, Wyden recounted how Medicare rules slowed down the patient’s ability to receive specialist care in a timely fashion when every second counts in saving mobility, communication and other basic functions. “We need to throw those kinds of rules in the trash can,” he said. “An outdated Medicare policy cannot be the reason that a stroke victim is left unable to speak with loved ones.”

Further, he said Medicare must help customize the care that people need. Wyden noted a current pilot project of the Affordable Care Act that allows Alzheimer’s patients to stay at home, which has produced improved outcomes at a lower cost.

Wyden offered a glimmer of hope regarding bipartisan support for Medicare reform. Both the Senate and the House are now considering bills on the future of Medicare that address chronic care.

Wyden concluded the event with an election year admonition. “Don’t let anyone who is asking for your vote in the fall off the hook when it comes to Medicare guarantees,” he said.

Key things to know about current health concerns around the world.

How to nudge doctors to write fewer antibiotics prescriptions

Medicare seniors likely to be sicker, live longer in near future

The economics expert plans to advance his research on health outcomes of early childhood education.