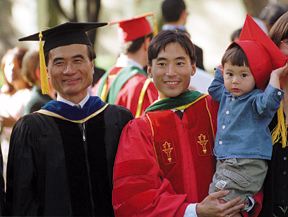 Hundreds of family and friends flocked to the Shrine Auditorium on May 17 to show support for graduates during the School of Medicine’s113th commencement ceremonies. M.D./Ph.D. graduate Daniel Chen ( holding his son), poses for a shot with his mentor, Michael Lai, professor of molecular microbiology and immunology.

AT THE END OF A HIGH-SPIRITED graduation ceremony at the Shrine Auditorium on May 17, the School of Medicine sent 183 graduates out into the world. Hundreds of elated family and friends mobbed the graduates afterward and showered them with praise, hugs, flowers and balloons.

During a special celebration the previous afternoon, school officials also honored the academic and service achievements of top students at the School of Medicine’s annual Senior Awards Ceremony in Mayer Auditorium.

Students were singled out for their performance in areas including basic science, family medicine, emergency medicine, pharmacology, endocrinology, and service to their classmates, the medical community and the entire university community.

Katsufrakis praised the efforts of those receiving awards.

“Obviously, we think all of our students are fantastic, but these students, especially, have demonstrated excellence on a number of fronts during their time here. The awards ceremony honors them for their academic and research excellence as well as their service to the community,” Katsufrakis said.