Poachers hunt tigers with traps and guns. In the near future, wildlife rangers might up their game by hunting poachers with artificial intelligence.

That high-tech tool is in development thanks to USC computer scientist Milind Tambe, the Helen N. and Emmett H. Jones Professor in Engineering at the USC Viterbi School of Engineering. Since 2013, he’s been working with international agencies to test software he hopes will one day predict where poachers are likely to strike within wildlife parks. The Protection Assistant for Wildlife Security (PAWS) software helps rangers randomize their patrols, learning from new data on poacher sightings and animal-roaming behavior.

That idea is just one of many to be discussed today in Washington D.C., where Tambe will join experts from across the country for a public workshop organized by the White House Office of Science and Technology Policy. Artificial Intelligence for Social Good will feature a wide-ranging conversation on how A.I. could improve public health, protect ecosystems and address a host of urban development issues.

The daylong event comes as A.I. is having a moment. In tech publications like Wired and in film and TV, the idea of thinking machines has captivated the public. That futuristic promise is more science fiction than fact right now, though Tambe admits those theoretical possibilities excite him as well.

But he said the current conversation around A.I. risks overshadowing the technology’s full potential. There are important, complicated humanitarian problems that A.I. specialists could be addressing, he said.

“In my mind, there’s a need to push our field to do even more,” Tambe said. “My personal view is that A.I. has so much more to contribute to problems we face today.” 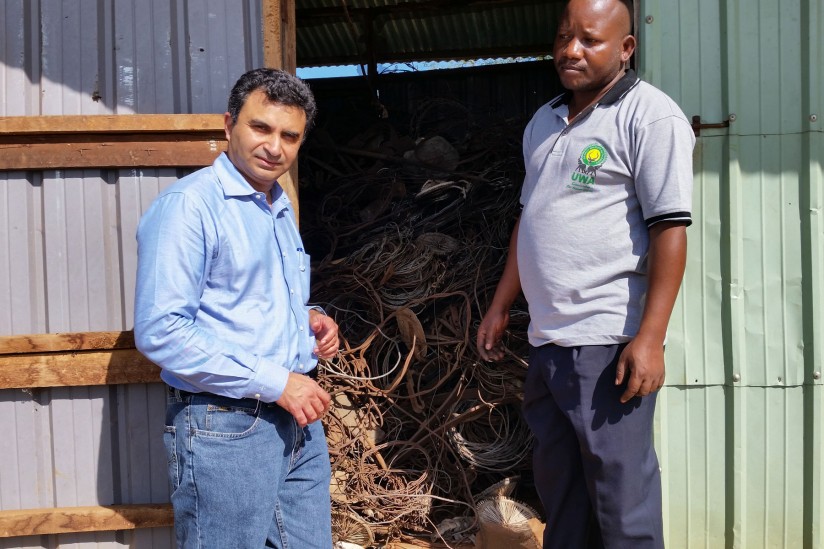 USC computer scientist Milind Tambe, left, pictured in front of poacher’s snares. Tambe works with international agencies to test software he hopes will one day predict where poachers are likely to strike within wildlife parks. (Photo/Courtesy of Milind Tambe)

Tambe is no stranger to applying his research outside of the lab. PAWS grew out of earlier work he spearheaded to defend national security. Since 2007, he’s worked with a host of federal agencies and cities to enhance security patrols. Software he’s developed has been put to use at Los Angeles International Airport; four major American ports, including at Los Angeles and Long Beach; and to randomize the flight schedules of federal air marshals. It’s been tested by Los Angeles Metro, which is in talks to regularly deploy Tambe’s A.I. software.

A.I. provides a critical advantage in resource management. If you have only so many security guards on patrol and have a large area to protect, you want to schedule patrols near sites most likely to be attacked. But if you concentrate all your resources there, patrols become increasingly predictable and leave other areas defenseless.

Tambe’s systems provided measurable outcomes that prove A.I. can be more efficient in managing patrol schedules than a lone human decision-maker. After LAX security officials implemented Tambe’s first software system, called ARMOR, they saw an immediate, five-fold increase in the seizure of weapons, drugs and more. In 2013, a study by Los Angeles Metro found a 66 percent increase in the number of fare jumpers on L.A.’s subways. ARMOR was even adapted for the U.S. Coast Guard to catch illegal fishers in the Gulf of Mexico. ARMOR-FISH, tested in 2014, located illegal activities, though funding for the project has since stalled.

But wildlife parks present a different set of variables. Tambe and his graduate students have traveled to Queen Elizabeth National Park in Uganda and the forests of northeast Malaysia to learn about the challenges facing rangers. The PAWS software takes into account what Tambe calls “the streetmap of the jungle” — the natural byways that animals and poachers use to traverse the challenging terrain.

Where will poachers strike?

This summer, Tambe will run data collected by rangers in 2015 to see if they can make accurate predictions regarding where poachers are likely to strike this year. He’s optimistic: ARMOR was useful at LAX despite the low number of repeated threats. In wildlife parks, poachers attack frequently, so there’s more data with which to work.

“If you’re playing chess against Kasparov, you’d play more conservatively,” Tambe said. “Whereas if you see someone play a lot, you know what their weaknesses are, and you know when they aren’t playing as well.”

Milind Tambe, professor of computer science at USC Viterbi, has been selected as a fellow by the Association for Computing Machinery.

The computer scientist, who has a thing for science fiction, tells how a byproduct of his research is improving security at airports.

To PROTECT and Serve

What began as a way to randomize airport security police patrol routines while simultaneously maintaining the same level of protection at Los Angeles International Airport has now moved on to encompass ocean protection.