College campuses like USC are microcosms of society, reflecting the realities of their surrounding communities and bearing frequent comparison to them in terms of diversity and opportunity. Campus diversity efforts work to make sure that the university’s population of students and faculty is representative, accepting and inclusive of the global community it serves.

USC’s recently released student and faculty diversity numbers provide a gauge for measuring the university’s results so far. Among the highlights: USC earns the top spot for enrolling more underrepresented minority students than any other private institution in the Association of American Universities. The school also leads the nation’s universities in enrolling the most underrepresented minority graduate students.

USC leaders say there is still more work to do regarding faculty diversity on campus. While gender and ethnicity numbers among tenured, tenure track and non-tenure track faculty are similar to that of other private universities, USC continues focused efforts to boost faculty gender and ethnic diversity through several new and existing programs. The university also considers veteran status and socio-economic background in an effort to expand student diversity beyond race and gender, to also include a wide range of life experiences.

“All of our lives are enriched not by surrounding ourselves with like-minded people, so much as they are by including those who are different,” USC Provost Michael Quick said. “That diversity of experience creates a rich contrast in perspectives that gives us all a chance to challenge our status quo.”

Many of USC’s newest efforts to increase access and opportunity stem from recommendations made this year by the Provost Diversity Task Force representing faculty, students and administration. Structural changes such as the creation of a Diversity Council and the appointment of school diversity liaisons to develop five-year plans to bolster diverse student and faculty representation are complemented by increased funding for scholarships, such as the $10 million gift from George Lucas and Mellody Hobson for African-American and Latino student scholarships to the USC School of Cinematic Arts. This is in addition to USC’s annual commitment of more than $80 million to support diversity at USC and in the community. (The provost’s April 19 update on access and opportunity, diversity and inclusion is available online.)

No matter how broadly or narrowly one defines diversity, the challenge of building a faculty reflective of its student body and the larger community is one facing universities and colleges across the United States. While the student body renews itself each fall and spring as new students enter and others graduate, the faculty numbers stay relatively stable year to year. When new positions open up, faculty and administrators doing the recruiting often find a small pool of underrepresented minority candidates to choose from. Nationwide, university officials call this the “PhD pipeline” problem.

Efforts to fill this pipeline for diverse faculty members are far-reaching. USC President C. L. Max Nikias  highlighted the issue in his annual State of the University address in February. “If we are going to create more diversity in American higher education among our student body, our PhD students, our postdoctoral scholars and our faculty, eventually we must pay attention to the pipeline,” Nikias said, noting that the pipeline extends to K-12 schools as well as universities. “If we don’t do that, we have no chance.” (Story continues below graphic) 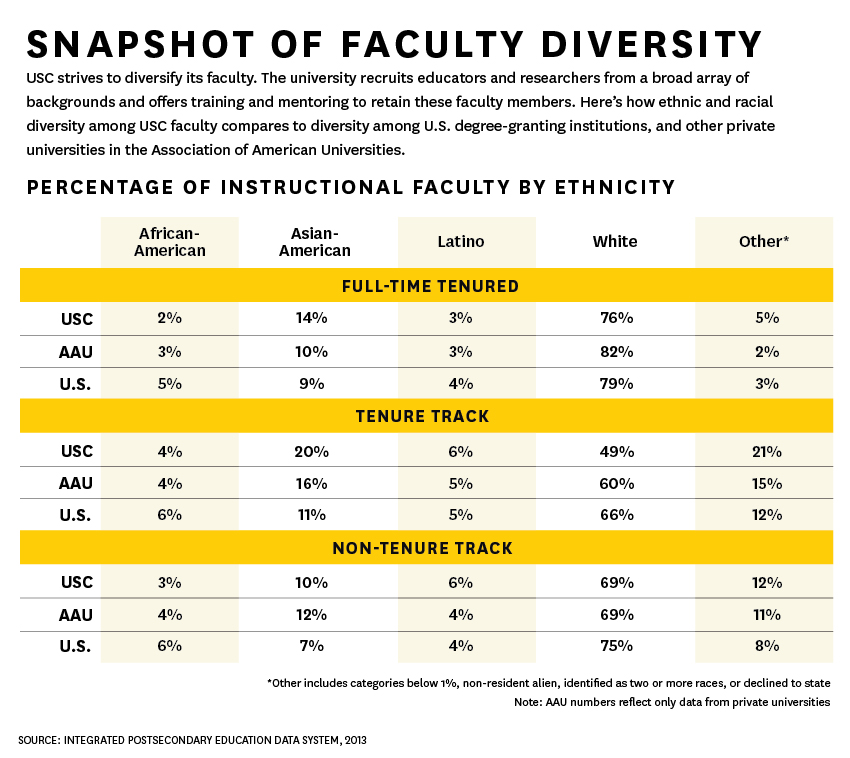 “All of academia is focused on how we can attract more diverse faculty to our campuses, and help them succeed once they’re here,” said Elizabeth Graddy, vice provost for academic and faculty affairs. “Our efforts include recruiting underrepresented students into our graduate programs and scholars into our post-doctoral programs. Then once they’re here, we provide training and mentorship programs to help them succeed in future positions here or at other universities.”

At both the graduate and undergraduate level, USC has invested heavily to attract high-performing students from ethnically and financially diverse backgrounds. “We work hard on enrolling a diverse student body,” said Katharine Harrington, USC vice president of admissions and planning. “The racial, ethnic, geographic and socio-economic diversity of our students strengthens the learning experience for everyone.”

• USC is No. 1 in enrolling under-represented minority graduate students among Association of American Universities schools.

• USC is No. 1 in enrolling Latino graduate students within the AAU.

• USC is No. 1 in enrolling the most under-represented minority undergraduate and graduate students among private American universities.

• USC is No. 1 in enrolling the most Latino undergraduate and graduate students among private American universities.

• USC is second only to New York University among private universities in enrollment of undergraduate under-represented minority students, and of Hispanic undergraduate students.

Recruiting doesn’t stop with high school. For years, USC has enrolled more transfer students, particularly those from community colleges, than any other private research university. Welcoming and supporting transfer students reflects USC’s effort to expand access to higher education to academically qualified students from a variety of backgrounds. Nearly 60 percent of USC transfers come from California’s community colleges, and another 10 percent come from the University of California or California State University systems.

The university’s touch extends even to elementary school students, through local community outreach programs such as USC Mission Science. Funded by USC Good Neighbors program, the STEM-based program provides neighborhood elementary and middle school students with fun, hands-on learning projects and experiments that take place after school. Reaching students earlier helps USC develop its own pipeline for local students to earn their degrees on its campuses. Its flagship college prep program, Neighborhood Academic Initiative, offers a full-financial aid package to all who are accepted to USC. The program just expanded and will eventually be enrolling more than 1,000 children.

Engaged in the neighborhoods

“USC is very engaged in the south and east Los Angeles neighborhoods near our campuses and the greater community,” said Thomas Sayles, USC senior vice president, university relations.  “Virtually all of our NAI students have gone on to college, with many receiving full-tuition scholarships to USC. We’re helping them not just go to college, but to be equipped to succeed now and in the future in their chosen fields.”

Programs like USC’s new Graduate Initiative for Diversity, Inclusion and Access aim to increase diversity in graduate and doctoral programs with stipends and boot camp workshops on applying for fellowships and grant funding. USC is also tapping into national efforts with its new membership in the National Center for Faculty Development and Diversity. This nationally recognized program links university faculty, post-doctoral and graduate students to mentors, skills development training and career advancement experience. Supportive programs like these aim to actively cultivate talented scholars from diverse backgrounds and to encourage them to become professors. These efforts complement work being done by professors like Steve Finkel, whose USC Center of Excellence in Genomic Science has earned National Institutes of Health grants for its programs aimed at improving the pipeline of underrepresented minorities in biomedical research.

“Increasing faculty diversity numbers won’t happen overnight,” Quick said. “Recruitment, retention and grooming the next generation of scholars are all part of the mix we have to get right. I’m heartened by our success in increasing student diversity, and believe we can extend some of the lessons learned to strengthening the pipeline of postdoctoral and graduate students into faculty positions at institutions across the nation.”

Trojan trailblazer has blended professional dreams with marriage and parenthood