Sleepy undergraduate engineering students surround a crackling fire pit, embracing the heat it emits. It’s 6:46 a.m. on April 30. The sun has just begun to peak over the San Andres Mountains in New Mexico, and all is calm.

This isn’t what you’d expect from a group of budding rocketeers about to attempt to break a world record. Instead of rushing to make last-minute adjustments or bursting with excitement, they sip quietly on hot chocolate and munch on poppy seeds and blueberry muffins.

“This is probably the most prepared I’ve ever seen them,” said Daniel Erwin, professor and chair of the USC Viterbi School of Engineering’s Department of Astronautical Engineering, who also advises the team. “The morning of a launch is usually pretty hectic.”

But the USC Rocket Propulsion Laboratory (RPL) has done everything possible to ensure a successful launch. Just two days earlier, the engineers loaded their rocket, Fathom, on a trailer and drove across two states to reach Spaceport America in Sierra County, N.M. The spaceport granted the students clearance to fire Fathom from its vertical launch site. 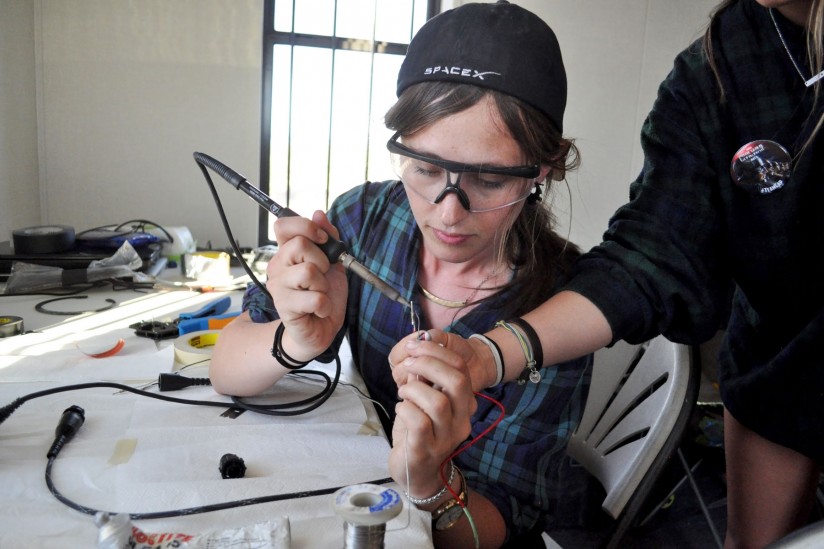 Fathom is the culmination of 12 years of work. Since the RPL was founded in 2004, the lab has launched more than 15 rockets. Each receives its own unique name — Traveler, Tirebiter, Déjà Vu, Déjà Two and so on — and each builds on the successes and failures of the previous rocket.

If all goes according to plan this morning, Fathom will fly more than a mile per second and reach an altitude of at least 182,700 feet. That’s like climbing a mountain six times the height of Mount Everest or stacking 126 Empire State Buildings on top of each other. And if Fathom happens to surpass 199,580 feet — the world record for a student-flown rocket — it will go down in history.

That’s not “the real mission,” though, said USC Viterbi sophomore Haley Karow, who majors in astronautical engineering. The lab has actually set its sight on 328,084 feet — the edge of space.

“We want to be the first student-run group to launch a rocket to space; no one’s done that yet,” he explained. “That’s the drive, but to do that, we understand that you have to take steps.”

Their strides have been impressive thus far.

The RPL is the only student lab in the world that has attempted a space shot — a rocket launch intended for space. In fact, the lab has tried three times now, inching closer to its goal each time.

Obtaining government approval to shoot a rocket into space was a feat in itself. Prior to the RPL’s first space shot in 2013, students had never made such a request to the government.

“There were so many hurdles; it was a lot of bureaucratic tape,” said junior Allie Gehris. “They needed to be sure that we knew what we were doing, that we weren’t going to cause an accident.”

Two generations of lab students worked tirelessly with dozens of agencies, including the Federal Aviation Administration and the Bureau of Land Management, to be granted clearance. Their persistence paved the way for USC, and subsequent universities, to regularly gain flight access since then.

What the students learn on this day will prepare them for BALLS 25, a premier rocketry event in Black Rock Desert, Nev., where amateur rocketeers from across the United States will flaunt their technologies.

“Alright, I need the launch team ready in five minutes!” one student yells out of nowhere. The students stifle their yawns. It’s go time.

The rocket is loaded gently onto a truck bed and driven down a rugged dirt path to a concrete launch pad. Students, spectating alumni and even Professor Erwin cram into another truck bed to follow behind.

At the pad, the rocket is attached to the launch rail and quickly raised into position. Camera shutters snap rapidly as the students pose with their beloved Fathom. And just as soon as they arrive, it’s time to clear the launch site. Everyone scrambles back onto the truck, glancing back as they drive away.

Back at the observation area, a student barks last-minute orders through a walkie-talkie and starts the countdown.

“Five, four, three, two, one …” he yells loudly. Everyone holds their breath. 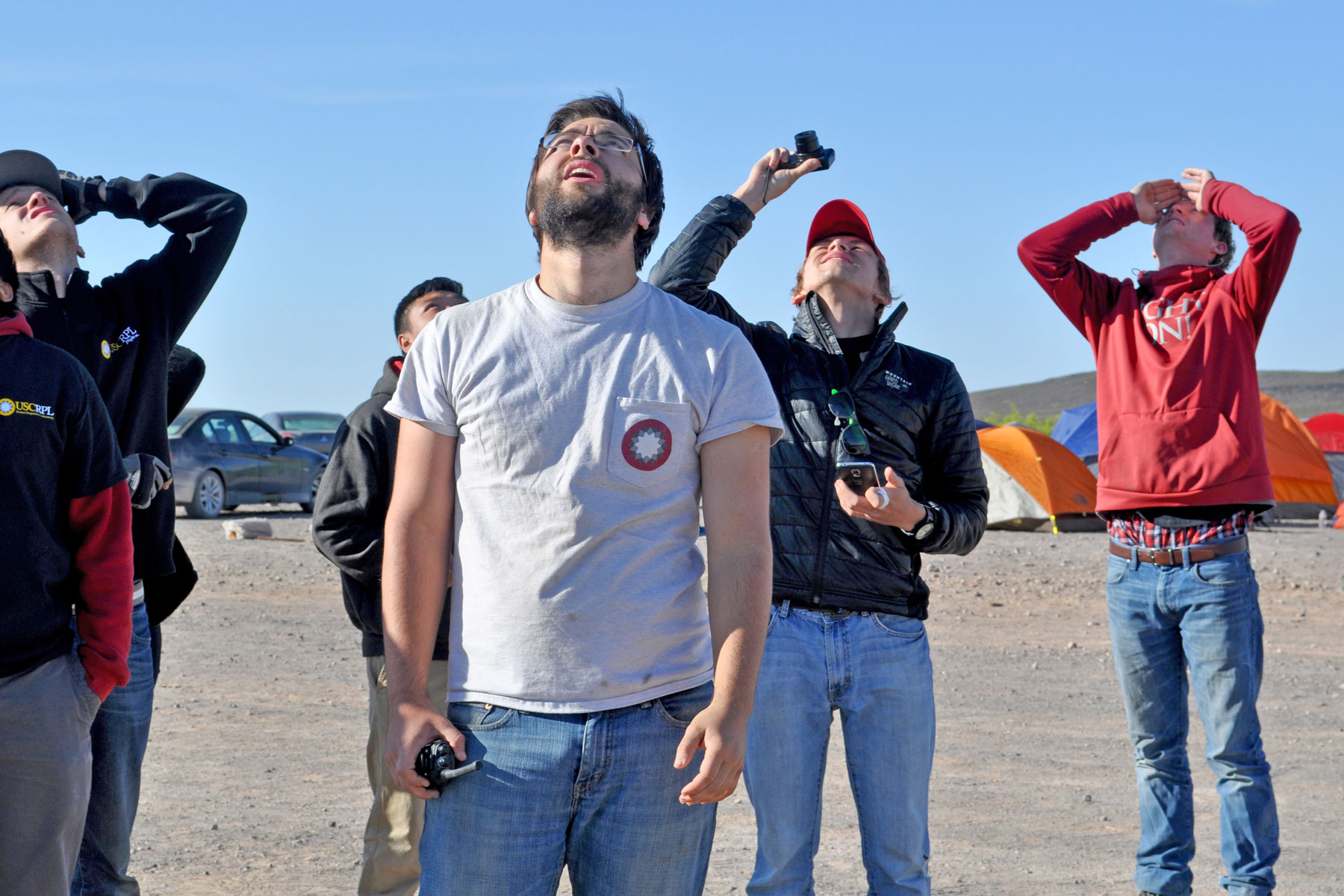 Fathom rumbles in the distance. Smoke spews from its motor right before it soars from the pad. The takeoff is a straight shot — it was “beautiful,” bystanders said afterward.

But a few seconds in, Fathom starts to wobble in the air. Its white, cloud-like smoke trail starts to curve off course. The students stare, speechless. Seconds later Fathom is falling, burning at both ends.

“That shouldn’t happen,” someone murmurs.

As the rocket has fallen, the recovery team jumps into a truck and rushes in the direction of the debris. A fire truck follows to put out the flames.

Karow, who helped track down the rocket, was sad to find Fathom wrecked.

“It’s heartbreaking to watch something that you spend so much time and dedication on have an end result like this,” the sophomore explains. “I will say that every failure leads to more knowledge, and that’s what really matters: finding a solution to improve our technology.”

This last point, Gehris notes, is one of the things that truly make the project unique. Unlike other student design competitions, which are given a problem to solve, the RPL must first identify the problem before coming up with a solution.

But if the group’s history is any indicator, there’s strong reason for optimism.

In the fall of 2014, for example, after the launch of DCX, USC students found a flaw in the rocket’s thermal protection system — an insulation layer surrounding the rocket’s powerful motor, which burns at thousands of degrees Fahrenheit and generates heat that can tear the rocket apart.

In a matter of months, students were able to design and test a new thermal protection system. This culminated, in spring 2015, into arguably the largest successful composites static fire for an amateur rocketry group.

Said Gehris: “Given how well our spring 2015 launch went, I have high hopes that we will have a new or better technology by the time BALLS 25 comes around. I have total faith in our group that we’ll fix it pretty quickly.”

Though Fathom may be headed for the rocket graveyard, the students’ dreams have not yet fizzled out. As always, they press onward, daring to fathom the unfathomable reaches of space.

As the team’s motto goes, “Flight on!”

Aptly named after the university’s mascot, a rocket dubbed Traveler was launched in the Nevada desert by the USC Rocket Propulsion Lab.

Wait, This Is Rocket Science

Undergrad believes hands-on experience at Propulsion Lab is the key to his research.

The university’s diversity, commitment to the military and wealth of research made it an ideal fit for this agreement, which begins a formal partnership.