The entrepreneurial mindset is thriving at USC, as demonstrated in an awards ceremony for inventive startups.

The Lloyd Greif Center for Entrepreneurial Studies at the USC Marshall School of Business gave out its top honors at the Marcia Israel Awards Banquet, including $50,000 in seed money to six student or recent alumni startups.

The startups ranged from an app that revolutionizes the way people socialize around streaming content to redeveloping Latino communities by empowering their business owners.

An app to watch

Taking the $15,000 top prize in the annual New Venture Seed Competition — announced at the banquet — was Showgo, a mobile app that syncs with whatever TV show a user is watching whenever he or she chooses to watch it, allowing that user to read and post comments in real time. Its founder is Bubba Fish ’13, an alumna of the USC School of Cinematic Arts. 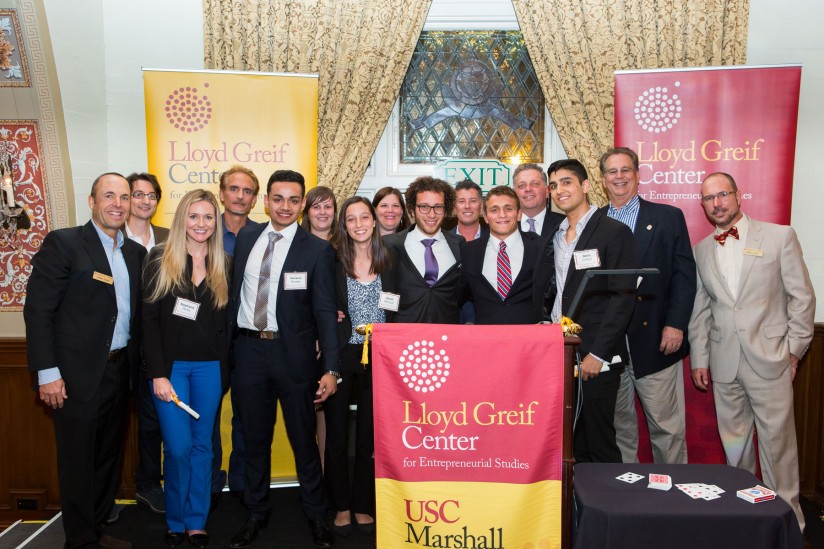 “It looked like pretty unique technology, a creative idea and viable from a revenue and earnings standpoint,” said Greif, founding donor of the Greif Center and a judge for the competition. “I think it’s got legs.”

Sarah Weingust ’16 and Meir Razzo ’16 took second place and $10,000 for HostelPass, which allows travelers to pay a fixed $50/night in advance to stay in a vetted and curated hostel in select European cities.

Weingust and Razzon thanked the judges for the vote of confidence.

“It means that people other than Meir and myself recognize the potential for this business,” said Weingust, who was also named as the year’s Marcia Israel Outstanding Undergraduate.

In the spirit of Israel, the founder of Judy’s Boutiques who endowed the annual banquet to celebrate student entrepreneurship after her passing in 2004, many of the awards at the banquet went to students with a focus on social entrepreneurship.

Barney Santos MS ’16 was named the Marcia Israel Outstanding Graduate Student for his work involved in the founding of Gentefy, a social-impact retail incubator for distressed Hispanic communities. Gentefy partners with local businesses that might otherwise be operating out of a cart, providing business training and space in retail hubs made from recycled shipping containers.

“Marcia Israel wasn’t just about being a successful entrepreneur — she was also very much engaged in giving back,” Greif said. “Santos is giving back to his community with a unique model that combines for-profit and nonprofit enterprises working together to provide employment and entrepreneurial opportunities in underprivileged Hispanic communities.”

Two companies were awarded $7,500 each: SuppNow, a nutritional supplement vending machine placed in a gym’s lobby, led by Armand Farrokh ’15 and Nick Cegelski ’16, and HexCare, an app that aggregates and simplifies health care data, from Alex Wormuth ’15 and Chad Martin ’16.

This year’s New Venture Seed Competition had 213 team applications, 61 of which were chosen to make presentations. Fourteen semifinalists met every Saturday morning for six weeks to exchange ideas.

Weingust, who said HostelPass would put its seed money toward marketing the service, noted that the journey of the competition itself was as valuable as the prize money.

“We got to practice pitching, talk to potential customers and discover what they wanted and how we can address those desires,” she said.

Ready, Set, Food! — which is staffed in part by USC Marshall alumni — impressed the famed investor so much that he put $350,000 into the company.

In a season of giving, this student startup is transforming how we think about philanthropy

Duet — a student-built microphilanthropy startup — looks to connect donors with refugees and their family-owned stores in a more personalized and dignified way.

Can’t find time for the people who matter most? There’s an app for that

Wellsayer, an app developed by an entrepreneurial USC Gould student, focuses on well-being by helping users schedule and manage relationships.

Innovators of USC: This company could advance the field of next generation sequencing

USC alumni Joseph Dunham and Chris Angermayer have founded a company called SeqOnce with the goal of revolutionizing genomics research.