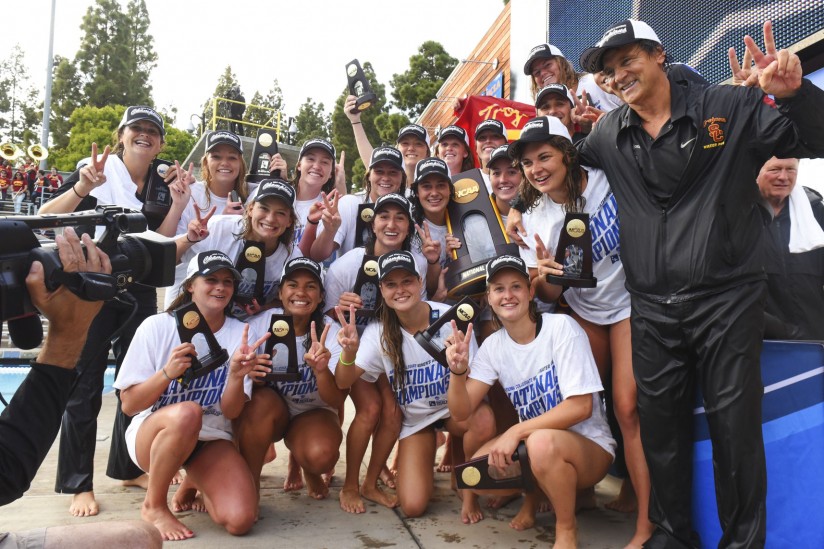 In a matter of seconds, USC’s two-goal lead had evaporated. Defending NCAA champ Stanford had shown its championship savvy with back-to-back strikes to tie the 2016 National Collegiate Women’s Water Polo title match with 11 seconds to go.

As it turned, out, 11 seconds was plenty to time for the Trojans. On the attack and hungry to capture its fifth national championship, USC put game-winning responsibility into the deft left hand of Stephania Haralabidis. The junior stepped right up and sizzled in the score from near half-tank, taking her Trojans to an 8-7 advantage with just 6 ticks to go. From there, it was up to the sure-handed freshman goalie Amanda Longan to haul in the Cardinal’s last-ditch effort. Longan took care of it, and a hard-earned celebration ensued for the Women of Troy.

The 8-7 victory over Stanford secured USC’s second undefeated season in program history while capturing its fifth national championship. With a perfect 26-0 record, the USC women have chalked up the university’s 125th all-time national championship, and the 102nd NCAA team title in history.

The squad wins the first-ever NCAA tournament in the sport, marking the university’s 101st NCAA championship.

The Guadalajara-born athlete will go pro in Europe for a few years, then hopes to return to USC for a master’s degree.

The Trojan and NFL legend will succeed Pat Haden, who in February announced he would retire from the post at the end of June.