When alumna Ruth Launer decided to buy a wool graduation gown instead of renting it for her USC graduation, she could never have guessed the gown would go on to walk the commencement stage 45 times over the next 100 years.

The 1916 graduate, a botany major, had married that March, and by the time she was walking across the stage to pick up her diploma, she was two months pregnant.

“I’m pretty sure she was already thinking about the baby, my mother Eunice, wearing the same gown in the future,” said Launer’s granddaughter, Kathy Harris Tuynman Windsor ’66. Thus began a proud family tradition.

When it was time for Ruth Launer’s daughter, Eunice Launer Harris ’39, to don the gown, she embroidered her name on a scrap of fabric sewn inside the gown.

Fast-forward 77 years and the names of 45 family members, all meticulously hand-stitched, have since followed. The names are noted with their alma mater (most attended USC, but other schools include the University of California, San Diego and University of Oregon) and graduation year.

“The family always talked about USC and the Trojans,” Windsor’s older sister Janet Harris Tonkovich ’64 recalled. “When my eighth-grade teacher asked the class to write about our futures, my essay said I’d be attending USC, majoring in physical education with a specialization in dance. That’s exactly what I did.” 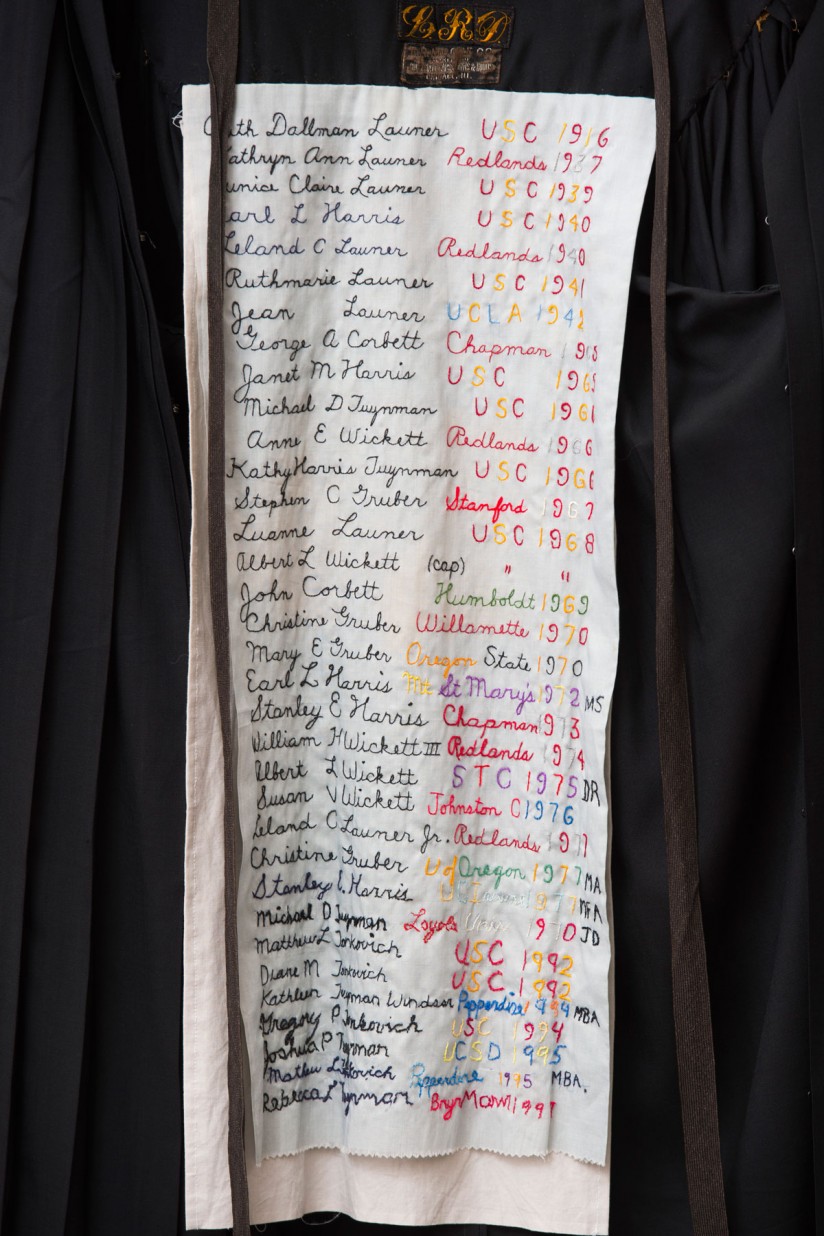 The gown bears the embroidered names of each person who wore it in a commencement ceremony. (USC Photo/Gus Ruelas)

As for Kathy Windsor, “The minute I was born, my grandmother had already figured out my graduation would be 50 years after hers,” she said.

But by her 1966 commencement, the wool gown was showing some wear.

The refurbishment has served the gown well. This year, Windsor will wear it once again and march in Friday’s 133rd commencement, celebrating the 50th anniversary of her graduation. As she marches with other Half Century Trojans, her mind will be on Ruth Launer, the woman who started a cherished family tradition a century ago.

Lately, the sisters have discussed the gown’s future. Can it withstand another 50 years? One hundred?

“We’re limiting it to our grandchildren,” Windsor said.

Time will tell. Either way, the gown may be making its way to Alumni Memorial Park for years to come.