“No pressure, right?” asked Sean Straw, a USC Viterbi School of Engineering junior in computer engineering as he waited to be summoned into the courtroom, his nervous hands digging into his pockets.

The trial simulated a real-world scenario down to the smallest detail. Students were not allowed to hear each other’s testimony and had to stay in the hallway waiting for the door to swing open and their names to be called.

“Every time that door opens, I just think, ‘stay calm, breathe and don’t let them lead you,’” Straw said. “ ‘You’re the expert. You lead the testimony’.”

The Honorable Judge Elden Fox presided in the LAX Courthouse and thanked the students for giving him “quite an education” in digital forensics, which police use to crack iPhones, computers and networks.

Special agent Jack Furay of the U.S. Secret Service questioned the students for the defense, and LA Deputy District Attorney Benyomin Forer did his job for the prosecution. The students, for their part, had to pull quickly from a fountain of digital forensics knowledge accumulated in two courses over the span of a year.

It’s part of their grade, so there’s no escaping the trial.

“It’s part of their grade, so there’s no escaping the trial,” said Greenfield, who has been teaching digital forensics for 10 years as part of USC Viterbi’s Information Technology Program. He has opened the class to majors outside engineering but requires students to take an introductory course before full submersion into the labyrinthine world of cybercrime.

“I designed the class as an advanced course focusing on Windows systems. It’s estimated that Windows comprises over 80 percent of the operating systems used worldwide, so we want them to get an in-depth experience of what they’ll likely confront in the real world.”

Alumni of the class were also on hand acting as both supporters and talent scouts.

“This class is near and dear to my heart,” said Joel Garrison ’13, who now works as a senior security consultant at Ernst & Young. “It launched me professionally. So I’m here to support my fellow Trojans and check out the talent. I was in their shoes once, and someone did the same for me.” 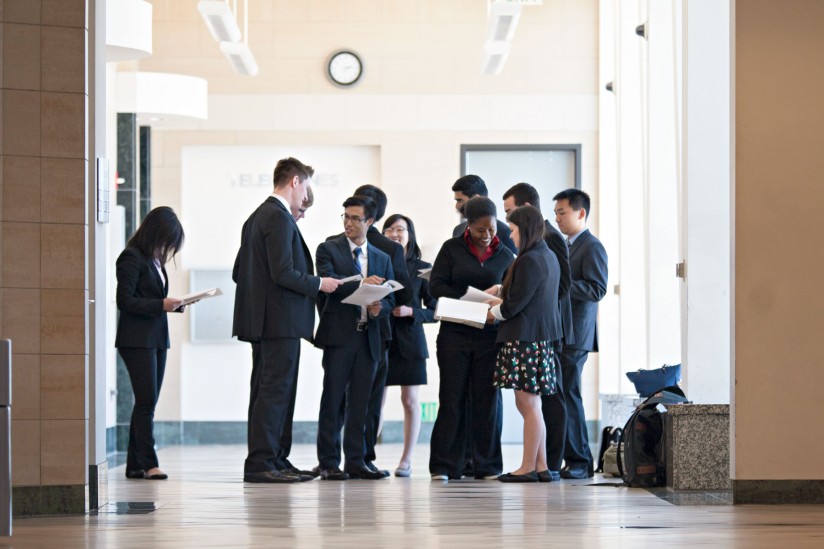 Advanced digital forensics students study their reports before being called into court to testify as expert witnesses. (Photo/Daniel Druhora)

With cybercrime on the rise, Garrison said there is increased demand for this kind of expertise. In 2015, IBM conducted an independent investigation that revealed 1.5 million cyberattacks hit the internet every year. That number means there are more than 4,000 cyberattacks every day, or 170 attacks every hour.

Microsoft has already created its own Digital Crimes Unit in light of a recent breach barrage that has hit the health care, financial, higher education and federal markets and even the security industry itself. The research firm Markets and Markets estimates that by 2017 the global cybersecurity market will skyrocket to $120.1 billion.

It’s no surprise that more USC students are responding to this challenge.

“I designed my own curriculum,” said Kshitij Kumar, a sophomore studying international relations, digital forensics and enterprise information systems. “I love this course. We get to practice the theory with so many cases thrown at us. The second day of class we got our first case. It’s been the most fun I’ve had in the last three years of studying at USC.”

Kumar, who previously interned for the U.S. Department of State, is also working on a senior research project that looks at the major cyberattacks of the last decade, analyzing them for their “political intensity.”

“I don’t know that I want to be a forensics expert — I love programming too much,” said Willard, who will be interning at Facebook in Massachusetts over the summer. “But in terms of understanding the security infrastructure that goes into software, this is by far the most interesting class I’ve taken. I wanted to go to class every day.”

In case you’re considering becoming a digital forensics investigator, we asked Forer, a veteran criminal prosecutor who has cross-examined hundreds of CSI-types, just what makes a sought-after expert witness:

“A great expert witness is someone who is a master of his or her subject matter, able to communicate with integrity to a lay person the concepts he or she is testifying to. The ability to communicate is so critical because without it, the expertise is lost and unshared. But it must be done with integrity. So above all else, please don’t lie, even about one little thing. If you don’t know, say you don’t know. Even if the lawyer on the other side drives you mad. Otherwise, even if you communicate effectively, the matter is lost. Just tell the plain simple truth.”

What is next in cybersecurity?

Wanted: an eco-approach to cybersecurity

Cybersecurity made national news in the wake of talks between leaders of the U.S. and China. USC’s Ranjan Pal studies how to boost it.

Tell the truth, the whole truth and nothing but the truth