Solomon Golomb, a legendary and longtime electrical engineering professor whose pioneering work in communications technology helped spark the digital communications revolution, has died. He was 83.

Golomb, who began his career at the USC Viterbi School of Engineering in 1963 and continued to teach a freshman seminar well into his 80s, was known for his singular ability to apply advanced mathematics to problems in digital communications.

Video images from the Mars Rover Curiosity owe a huge debt to Golomb’s mathematical coding schemes, enabling pristine imagery transmitted from the Mars Rovers all the way back to Earth. His work on shift-register sequences is integral to the function of cellular phones, while his cryptology research ushered in new approaches for securing communications signals.

“Professor Golomb was truly a giant in the field of mathematics and engineering,” said USC President C. L. Max Nikias. “He was an exceptionally imaginative thinker, and so many enduring innovations and highly creative games — including polyominoes and pentomino — emerged from his inimitable genius. But beyond the innumerable accomplishments, Professor Golomb was also a dear friend and colleague, having served on USC’s faculty for more than half a century. Indeed, he helped transform our university into the world-class institution it is today.”

In April, Golomb — a University Professor, Distinguished Professor of Electrical Engineering and Mathematics and holder of the Andrew and Erna Viterbi Chair in Communications — received the prestigious Franklin Institute’s 2016 Benjamin Franklin Medal in Electrical Engineering. With this award, he joined the ranks of Albert Einstein, Marie Curie and Andrew Viterbi, namesake of USC’s engineering school and Qualcomm co-founder.

Golomb received the Franklin Medal for his pioneering work in space communications and the design of digital spread spectrum signals — transmissions that provide security, interference suppression and precise locations for applications such as cryptography, missile guidance, defense, space and cellular communications, radar, sonar and GPS.

In 2013, Golomb went to the White House to receive the National Medal of Science from President Barack Obama — one only of 12 eminent scientists so honored that year.

For more than five decades, Golomb taught at USC Viterbi, touching the lives of thousands of students during his illustrious career. In the process, he helped elevate the school into one of the nation’s best in engineering.

Recruited simultaneously by UCLA, the California Institute of Technology and USC, he chose, in 1963, to become a Trojan.

“Some people were surprised I chose USC, but the question I asked myself was the one I ask my students: ‘Where can you make the most difference?’” Golomb told USC Viterbi magazine in fall 2012.

Over the years, his efforts helped develop the school as a major center of communications research. Golomb was one of the “Magnificent Seven,” the communications group that founded the USC Communications Sciences Institute in 1982. He was appointed the first holder of the Viterbi Chair in Communications in 1999.

Sol’s impact has been extraordinary, transformative and impossible to measure.

“With unparalleled scholarly contributions and distinction to the field of engineering and mathematics, Sol’s impact has been extraordinary, transformative and impossible to measure,” USC Viterbi Dean Yannis C. Yortsos said. “His academic and scholarly work on the theory of communications built the pillars upon which our modern technological life rests.”

George A. Bekey remembered his longtime friend as a true Renaissance man who could speak knowledgeably about nearly any subject, ranging from poetry to finance, from world politics to history. Bekey, professor emeritus of computer science, electrical engineering and biomedical engineering, called Golomb’s passing a sad day for him and the entire university. 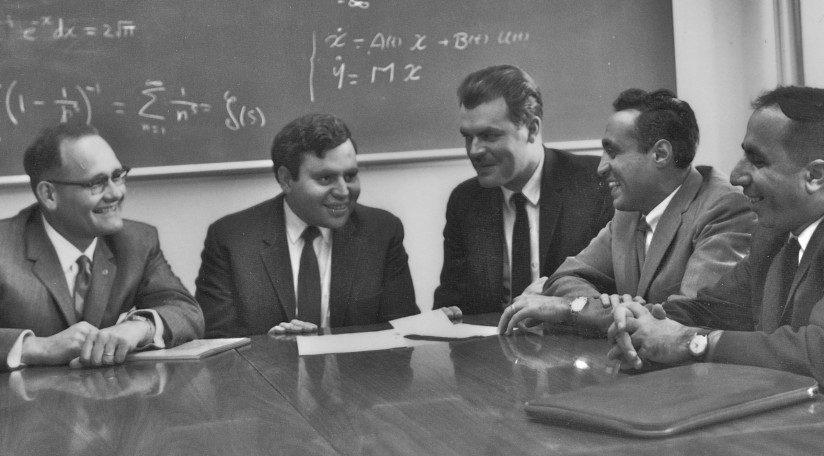 “He had a great sense of humor and a wonderful laugh,” Bekey said.  “He leaves a huge gap in our faculty, since there is no one who could stand in his shoes.”

Golomb also excelled as a recruiter, said Robert Scholtz, Fred H. Cole Professor of Engineering. “Sol was the architect of USC’s famous communications faculty in the 1960s,” he said. “All the people he recruited are now or were members of the National Academy of Engineering. He recruited me while on a visit to Stanford.”

When Sawchuk joined the school in 1971 as junior faculty, he turned to Golomb for advice, just as he would do when he later became chair of the electrical engineering department.

“Sol had a deep commitment to USC at every level,” Sawchuk said. “He was always preoccupied with how the university can advance. It came through in everything he did. He made the advancement of USC his personal goal.”

Golomb impacted the lives of colleagues even before he knew them. Sandeep Gupta, chair of electrical engineering-systems, said he read Golomb’s classic, “Shift-Register Sequences,” as a graduate student. Gupta said the book influenced his future research.

Gupta not only admired Golomb for his towering intellect, but also respected him for his personal decency and integrity, describing him as a “kind man who shared himself with all of us.”

Eun Sok Kim, chair of electrical engineering-electrophysics, said, “It is so sad to lose such a brilliant, kind, knowledgeable, steadfast and gentle colleague whom I respect greatly.”

Added electrical engineering professor Alan Willner: “He was the only non-family member to be at all of my children’s major events, every circumcision, every bar mitzvah. He was a person of such depth in so many areas.”

Even before joining USC as a full-time faculty member, Golomb had developed a relationship with the school. In addition to part-time teaching, he also mentored an up-and-coming graduate engineering student named Andrew Viterbi, who received his PhD in 1962. Viterbi met Golomb his first day at the Jet Propulsion Laboratory, where they both worked.

“From that day,” Viterbi said, “he wasn’t just my supervisor, he became my mentor.”

Viterbi remembered his friend helping him find a place to live. And it was in Golomb’s car, on a drive north to the Bay Area, that Viterbi had made his decision to propose to his wife, Erna.

A true polymath who spoke several languages to varying degrees, including Hebrew, Danish, Norwegian, Swedish, German and French, Golomb invented mathematical games, such as “cheskers,” a hybrid of chess and checkers. Golomb was also referred to as “the godfather of Tetris” for creating polyominoes that inspired the invention of the tile matching puzzle video game.

With his Old Testament white beard, it seems fitting that Golomb also taught a freshman seminar on the Book of Genesis on occasion.

His students remember him as a brilliant man who cared deeply.

At Golomb’s May 4 funeral, Terry Lewis PhD ’12 shared a story that conveyed the high esteem in which he held his mentor.

A little girl, he said, was along the seashore with her father and saw that thousands of dying horseshoe crabs had washed ashore. Distraught at the sight, the daughter asked him what she could do to help them. He replied “nothing,” since they couldn’t save all the rotting crabs. The girl picked one up and threw him back into the sea. “I just saved the life of that one,” the daughter said.

“That’s what Sol did for me and for other horseshoe crabs like me,” Lewis said.

Tuvi Etzion, a former postdoctoral researcher of Golomb’s and current professor at Technion Israel Institute of Technology, called him “a giant, one of the last ones in this generation.”

“I never met and I will never meet someone with so much knowledge in mathematics, engineering, grammar, languages, history and so many other areas in life,” Etzion said. “I had the unbelievable honor to have him as my supervisor. Giants never die, they will always be in our memory and will always influence our life.”

Golomb served as president of the Faculty Senate from 1976 to 1977 and vice provost for research from 1986-89. In 1985, he received USC’s Presidential Medallion, the highest honor the university bestows on a member of the USC community. In 1993, he was awarded the title of University Professor, an honor reserved for professors who have made significant contributions to USC in many disciplines; then in 2008, he received the distinction Distinguished Professor.

In 1976, Golomb joined the National Academy of Engineering, the first USC engineering professor to achieve the distinction while on the faculty. In 1985, he received the Shannon Award, the highest honor in information technology; in 2000, it was the Richard W. Hamming Gold Medal of the IEEE, followed, in 2003, by election to the National Academy of Sciences. Golomb is also a fellow of the American Academy of Arts and Sciences, the American Association for the Advancement of Science and the Institute for Electrical and Electronics Engineers.

The son and grandson of rabbis from Vilna, the capital of Lithuania, the Baltimore-born prodigy graduated from Johns Hopkins University with a B.S. in mathematics before his 19th birthday.

While working on his PhD at Harvard, he expected to travel the abstract route of pure mathematics, but a summer job in engineering, along with a Fulbright scholarship that took him to Oslo, Norway, took him in a different direction.

Instead of joining the academy, Golomb made his way to JPL. There, he and a distinguished group of colleagues played a key role in formulating the design of deep-space communications for the subsequent lunar and planetary explorations.

Years later when the eye-popping images started streaming in from the Red Planet, Golomb had reason to feel proud. The tightly compressed communications packages traveling millions of miles to Earth are the fruit of his 1966 research. Without heavy-duty compression, it would be inconceivable to send crisp, data-rich photographs over the limited-power transmitters aboard the twin rovers Spirit and Opportunity.

The universe will miss him as much as we will.

The Mars images were not Golomb’s first interplanetary milestone. In 1961, a radar signal encoded with another Golomb-devised signal technology bounced off Venus.

Just weeks after Golomb received the National Medal of Science in 2013, U.S. Rep. Karen Bass honored him on the floor of Congress.

“USC has long been a center for scientific innovation,” Bass said. “I am proud to have such an incredible leader like Dr. Golomb working in California’s 37th Congressional District.”

Added Viterbi: “We’ve lost a great mind. A great heart and a great sense of humor. The universe will miss him as much as we will.”

The National Medal of Science recognizes Solomon Golomb’s many contributions to communications technology.