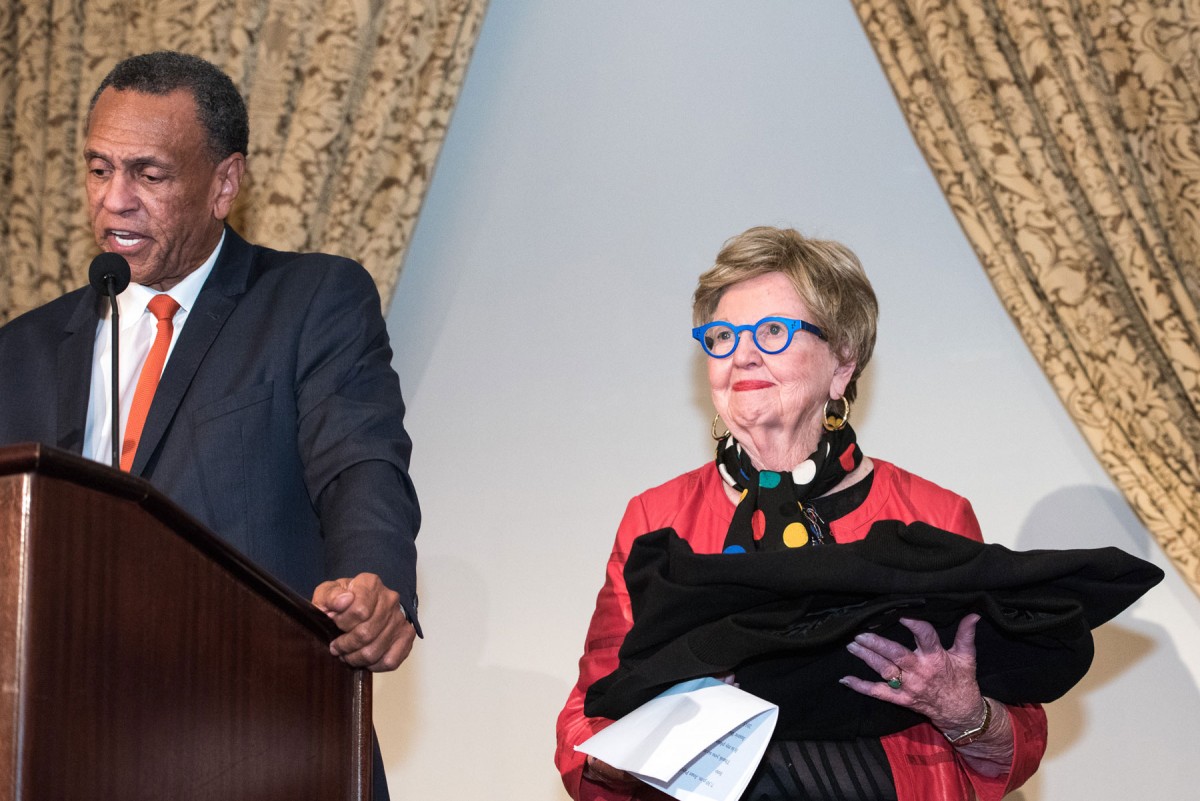 Joan Payden, a USC trustee and longtime NAI supporter, holds a USC jacket given to her as she is honored by Thomas Sayles at the NAI gala. (USC Photo/Michael Owen Baker)

USC’s Neighborhood Academic Initiative (NAI) honored its 2016 high school graduating class – a class from which all 56 graduates are headed to college or military academy – with a special awards gala and ceremony Thursday. 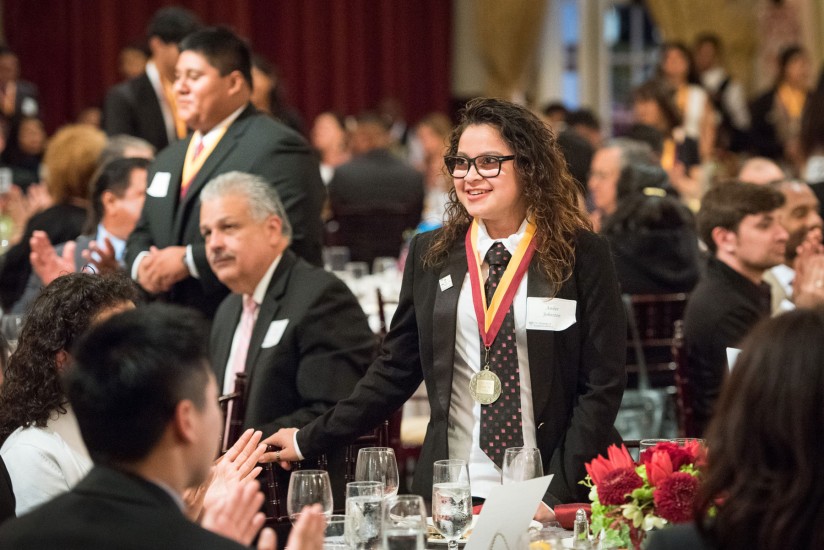 Nineteen of the graduates are headed to USC on full-tuition scholarships. Other students are bound for prestigious schools including Harvard University, Wesleyan College, Mount St. Mary’s University, Cal Poly Pomona and various campuses of the University of California and California State University systems.

“For personal and professional success, education remains an invaluable stepping-stone,” said USC President C. L. Max Nikias. “And for 25 years, USC has been opening doors of opportunity to the most talented students in our communities.”

First-generation and low-income minority students, who would be the first in their families to attend college, represent the majority of program participants. Graduating students spent seven years attending early-morning tutoring during the week and daylong Saturday classes at USC.

In addition to academic instruction, students can participate in a variety of extracurricular activities such as the USC NAI Theater Workshop. This year’s class boasts talented musicians who performed with Alicia Keys on The Queen Latifah Show. They also performed for Tony Bennett during a recent school visit.

“The USC Neighborhood Academic Initiative is more than just a program,” said Kim Thomas Barrios, executive director of USC Educational Partnerships. “It is a neighborhood-focused movement to provide a clear pathway to college, aiming to remove or lower the barriers to academic success that are frequently found to derail first-generation students.

“The NAI provides timely information to families, rigorous academics and support to first-generation, low-income South and East Los Angeles students, in order to completely prepare them for college entrance to and graduation from college.” 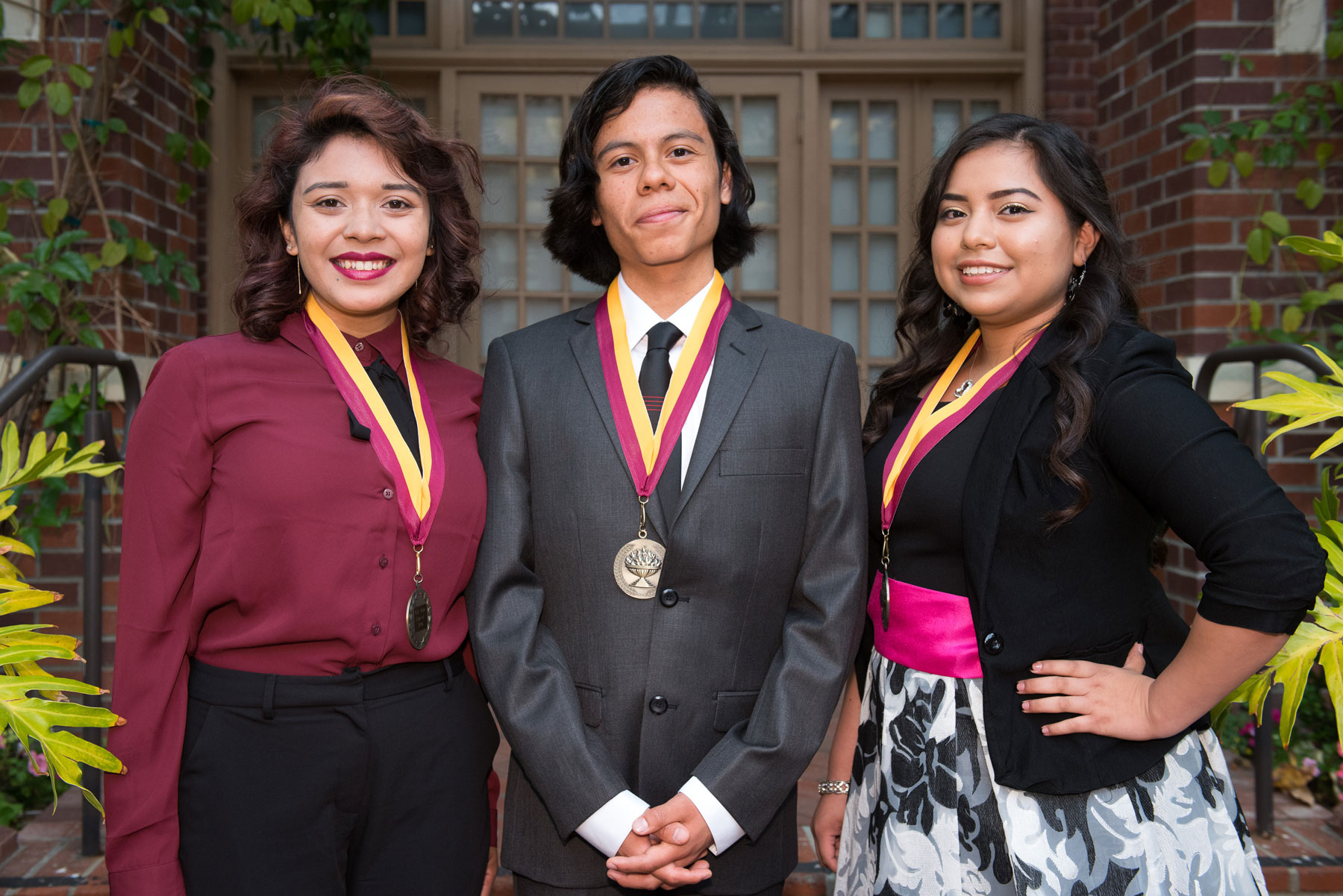 Meet three of this year’s graduates:

Mauricio Garcia is about to embark on the adventure of a lifetime. He is Harvard-bound.

The importance of a strong work ethic was modeled for Mauricio by his parents from an early age. They also endured extraordinary hardships before immigrating to the United States to raise a family. Both parents are originally from El Salvador. His father, a cook, was kidnapped by recruiters several times as a child during the civil war in his homeland. Mom, a child caregiver, didn’t own a pair of shoes until the age of 12.

During the past three summers, Mauricio has stoked his interest in STEM (science, technology, engineering and math) by participating in the SMASH (Summer Math and Science Honors) Pathways Program. He also received a National Hispanic Recognition Program award, among other accolades.

Mauricio plans to major in molecular and cellular biology at Harvard and hopes to become a cancer researcher.

Stephanie Cuevas’ mailbox has been overflowing with college acceptance letters, after she was accepted by 10 universities. Along with her successes have come many challenges as well.

During her junior year, Stephanie suffered the loss of both her great-grandparents and ended up in therapy. Despite the added stress, Stephanie was able to finish the year strong with mostly A’s on her report card.

A natural leader, she served as student body president in the fall, and has participated in the USC NAI Theater Workshop for the past six years. In addition to student life, Stephanie has volunteered at the Fred Jordan Mission during Thanksgiving, at the Los Angeles Times Festival of Books at USC and at the 2015 Special Olympics World Summer Games.

Stephanie plans to attend USC in the fall as a sociology major and is excited to serve as a mentor to her three younger siblings, who are also NAI program participants.

From the age of 15, Lilly Diaz spent most evenings at home helping care for her three younger siblings while mom worked two jobs. As a result, Lilly was assigned to homework duty and often worked late into the night to finish her own assignments.

Lilly’s many accomplishments include a Norman Topping Scholarship for outstanding community involvement, recognition from Los Angeles Mayor Eric Garcetti for her involvement in STEM activities at James A. Foshay Learning Center and being named a regional winner of a National Center for Women & Information Technology award.

Lilly plans to attend USC in the fall as an English major, with a minor in information technology.

At USC, we understand that college access programs are most effective when we work in conjunction with the school districts, parents, existing students and NAI alumni.

“At USC, we understand that college access programs are most effective when we work in conjunction with the school districts, parents, existing students and NAI alumni. It’s a holistic approach that has proved to be effective for 25 years,” said Thomas S. Sayles, USC senior vice president for university relations.

From NAI student to USC alumnus

Juan Ramirez is among the 38 former NAI participants expected to graduate from USC next week, the largest number to ever walk in a commencement ceremony. Like his peers, Ramirez benefited from extensive tools, resources and access to professors, faculty and staff during his college journey.

“At first I was intimidated to talk with my professors, but my Norman Topping Scholarship required me to take one of them to lunch every semester,” said Ramirez, a bachelor’s of science candidate. “I soon realized that my professors, and the faculty and staff, really wanted to help me succeed. They were invested in my success.” 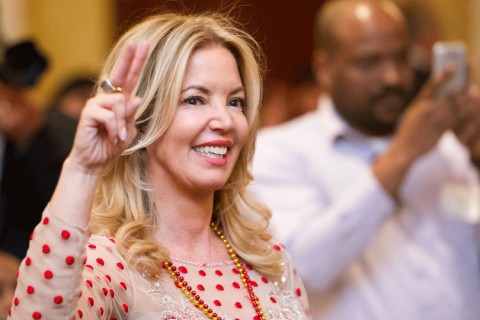 “Jeanie Buss, a phenomenal business leader of our city, still finds time to make Los Angeles a better place for youth, for which we honor her tonight,” said USC Trustee Joan Payden, a longtime beneficiary of the NAI program.

In addition to her well-known roles with the Lakers, Buss – also a USC trustee – is president and chief executive officer of the Los Angeles Lakers Youth Foundation, which supports underserved youth by providing positive experiences and resources in education, health and sports. The foundation has been a partner with the USC outreach program Kinder 2 College this year and will put on a boys’ basketball clinic this summer.

Buss also serves on the board of the Southern California Committee for the Olympic Games and supports several organizations including Canine Companions for Independence, The Amanda Foundation and the Best Buddies organization.

The USC Neighborhood Academic Initiative will expand beyond South Los Angeles to include more than 100 sixth-graders near the university’s Health Sciences Campus in East Los Angeles.