Sophomore setter Baylee Johnson lovingly calls her Trojan volleyball teammates the “gang of giraffes.” At 6 feet 2 inches, Samantha Bricio certainly fits that description. But when she first arrived as a 17-year-old freshman from Guadalajara, Mexico, the statuesque outside hitter tried to make herself small.

Bricio, who will graduate Friday with a degree in psychology from the USC Dornsife College of Letters, Arts, and Sciences, knew some English — having supplemented her high school studies with a hearty diet of American television. “But I was shy and avoided speaking whenever possible,” she recalled.

“One time when I was little, I remember I told my mom I was tired of volleyball and wanted to play something else. I picked badminton. I played it for a week. I got so bored — it was so slow. I thought: ‘This is awful. I don’t want this.’ Since then, I’ve never had a desire to play any other sport.”

Why no beach volleyball?

“I can’t stand the sand everywhere. I played club beach volleyball in Mexico one year. I can’t deal with it. I need to be clean. When I go to the beach, I have to sit on a towel or a chair. When I get out of the water, I have to take a shower.”

“Psychology 363: Criminal Behavior.” The instructor, Alex Yufik, was “really good and had a lot of connections. He would bring prosecutors to class and they would talk about their cases. Really interesting stuff. I learned so many things.”

Looking back, Bricio said, “it helped me a lot that I only had friends who spoke English because I had to practice. I had to communicate.”

Noted for her calm demeanor on the court, Bricio rarely reacted to her own power plays even as the crowd went wild. That changed last year, as she became team captain.

“I got a lot of comments that it looked like I was enjoying the game more,” she said. “And yeah, they were right. I would laugh on the court, I would celebrate.”

“It has been both fun and exciting to watch her grow,” said Women of Troy team head coach Mick Haley.

All in the athletic family

Bricio has played volleyball since she could walk. She comes from a very athletic family.

“My grandpa, uncles, nephews, cousins, all are athletes,” she said. “Everyone.”

Only one sport was forbidden in the Bricio home.

“My parents hate soccer,” Bricio said. “That’s something we were not allowed to touch: a soccer ball.”

As Bricio’s last season drew to a close, the records started piling up. 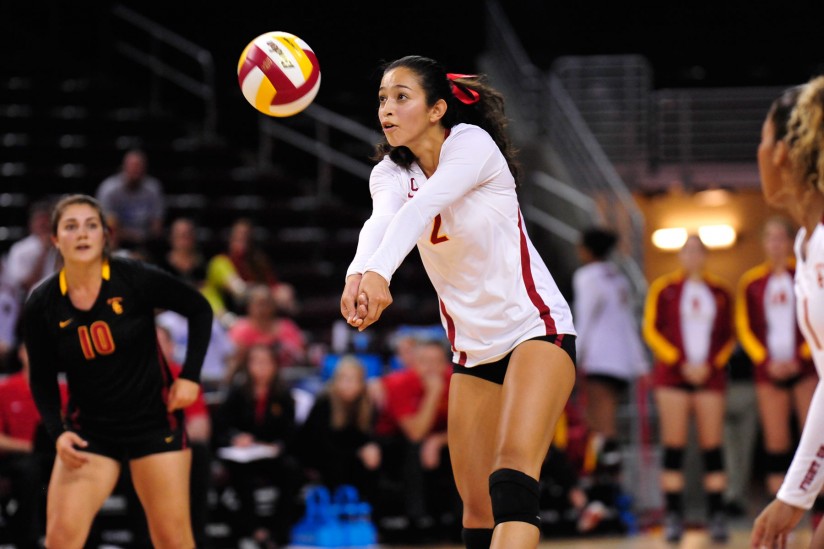 In January, Bricio won the Honda Sport Award for women’s volleyball. Presented by the Collegiate Women Sports Awards, the prize is given to the year’s top women athletes in 12 NCAA-sanctioned sports. Bricio is the fourth Trojan volleyball player to win it and the 16th USC winner across all women’s sports.

With this honor, Bricio became a finalist for the Collegiate Woman Athlete of the Year and the prestigious 2016 Honda Cup, which will be presented on a live telecast June 27 from the Founders’ Room at the Galen Center.

Bricio’s other accolades include American Volleyball Coaches Association 2015 Player of the Year and three-time AVCA All-American after earning first-team honors for the 2015-16 season. Volleyball Magazine, espnW, PrepVolleyball.com and HERO Sports all named her National Player of the Year.

Now a poised young woman of 21, Bricio has her future mapped out. She will play pro volleyball in Europe for a few years, then plans to return to USC for a master’s degree.

“For me and my family, it’s school first, volleyball second,” she said.

Her ultimate career goal: to become an FBI profiler.

“Everybody says I’m crazy, but I just think it’s really interesting. Have you ever watched Criminal Minds? That’s what I want to do.”

The All-American wraps up her four-year Trojan career with her sport’s highest honor.

The Women of Troy win their first championship in the sport, and USC’s 123rd.

Hayley Crone aces a conversation about athletics, academics, teamwork and life beyond the nets.

The Women of Troy took down UCLA for the fourth straight time to secure the conference crown.